Augustin Dorgal is the new  World Wakesurf Champion 2016. What a season for our young team rider, after winning the US Wakesurfing Championships in Callaways garden at the end of August and the European Wakesurfing Championships early September in Talloires – Lake Annecy,Augustin just won at end of September the World Wakesurfing Championships in Fort Lauderdale – Florida. It was really an amazing season for the young “Haut Savoyard” rider, he just won all possible titles, US Champion, European Champion and World Champion, he also won the CWSA ranking in its category (Amateur Skim Style) it seems that the Black Revolt Dagger Pro Custom with the flag of Haute Savoie has brought him luck. Congratulations to Augustin, we are really proud of him to have carried so many wins and put France, Haute Savoie and a small wakesurf brand handmade in France under the spotlight. 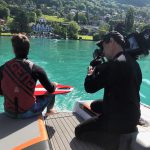