Report on Augustin Dorgal France 3 TV May 3, 2017 – In the winter, he takes advantage of the mountain doing freestyle skiing in Le Grand Bornand near Annecy. In summer, it’s the wakesurfing that he practices. Augustin Dorgal an 18 year old  savoyard who surprised the US riders in September 2016 at Fort Lauderdale, Florida by winning the title of skim amateur wakesurf world champion. 2016 was the year of all the success for Augustin, he first won the US championships at Callaways Garden near Atlanta in the USA, then the European championships in Talloires on Lake Annecy and finally the World Wakesurf championships in Florida.

This Thursday, May 25, 2017, in Annecy, wetsuit on the back, he trains without difficulty. His coach assure: “Augustin, it’s very easy to work with him. We ask him for a trick, he did it without any difficulty.”
Augustin started wakesurfing only 4 years ago, but his attendance and his attraction for the boards sports  which dates from his young age, allow him to pass semi-pro (outlaw) this year. If the young Annécien is there today it’s surely because of the Lake Annecy, which according to specialists, and not only the local ones, is the European reference spot for the practice of wakesurf.
In spite of everything, Augustine sees big. Ambitious, he multiplies Wakesurfing clinics in the US  at Dean Lavelle School, the US where wakesurfing can become a full time job. Its goal ? Become pro and win at the highest level. 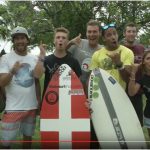