It was at 1:30 am (French time) on Sunday, September 24th that the news was announced live by speaker Sean Cummings, Haut Savoyard rider Sebastien Balland won 2 titles of world champion in Kelowna, British Columbia in Canada.

It was in the outlaw mens (semi pro) surf and skim division that Sébastien easily qualified, manage well the pressure of the finals on Saturday night. This year the World Wakesurf Championship was held in Canada for the first time with temperatures close to what we know in our beautiful Annecy area, it may what allowed our champion to express himself in the best conditions. With more than 15 points up in both division, Sébastien literally left his opponents behind and won the 2 division. These two trophies finally reward the most talented Wakesurf rider that France and even Europe have never known, but also the countless hours of training that allowed Sébastien to go and beat the Americans on their continent.

His victory was not so easy, the Black Revolt rider faced serious competitors, including the American Drew Drennan who, with 2 disastrous qualifying runs , took advantage of the LCQ to qualify at the last minute for the skim and surf finals and finished 3rd in both division. Let’s not forget our buddy Anthony Edwards the English rider who ride very well and finishes 2nd in skim division and Markus Lahmer the Austrian rider who makes 5th skim outlaw.

Sebastien’s 2017 season ended well with victories over all the competitions he participated in and the arrival for the 2018 season in the Pro divsion in skim and surf.

Find below the winning runs of Seb. 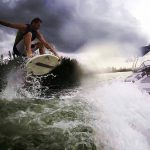